Can I Keep My Out of State Driver's License?

The United States Census Bureau reports that every year, 7.1 million Americans move from one state to another, and 1.8 million move to the country from abroad. Moving to another state can be a bit stressful, but among all the arrangements and changes, it’s crucial to not forget to apply for an out-of-state license transfer from the state where you came from, to the new state in which you reside. The requirements for licensing depend on the state that you move to since all states have different laws.

You also have to take into account that there is a limited period of time in which a driver’s license can be transferred from one state to another, and that period of time depends on the state that you move to. Many times, the advantage of going through the licensing process as a transfer is that you may not have to retake the knowledge test or the road test.  In the event that your prior state’s license has been expired for a long period of time, you will most likely have to apply for your new license as a regular applicant, and you’ll probably have to take the driving and knowledge tests.

As a result of all cases being very different and depending on every individual state’s laws, we decided to build a chart (below) to classify all 50 states based on the requirement’s level of difficulty to process a license transfer. This is assuming that the driver is at least 18 years of age and has a valid, unexpired license from another state in hand to make the transfer.

Note: States with the lightest orange color mean that they make it mandatory to take one or more tests (knowledge and/or driving) to process a license transfer. States that are light orange indicate that the DMV will examine the situation on a case-by-case basis, or that there is no guarantee that applicants will not have to retake an exam. The states with the dark orange mean that it is not necessary to take either the knowledge or driving tests, to process the out-of-state license transfer. 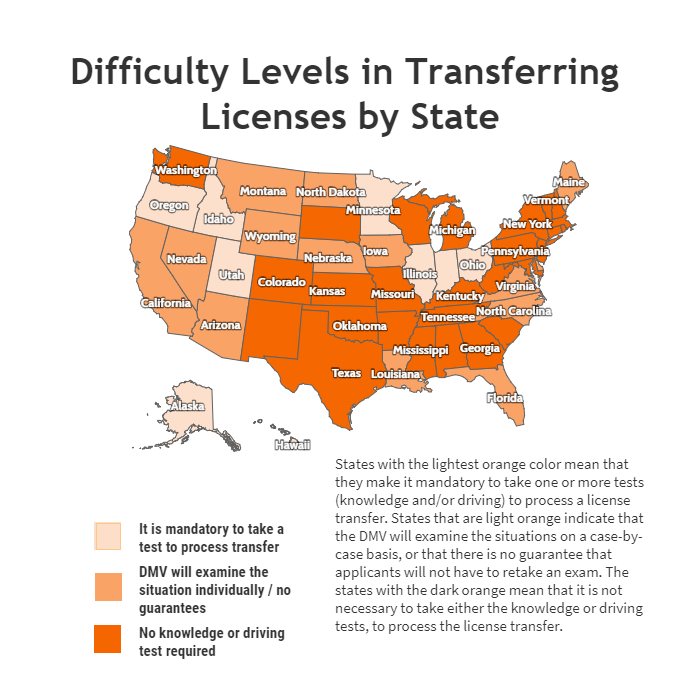 The chart above makes it incredibly clear how varied the licensing laws are in all states. On top of that, all states have different time period limits to obtain a new license, after becoming a new resident.

In the event that the driver is under 18 years of age, or if the driver’s license is expired or suspended for any reason, the new license requirements change drastically. Depending on the state, you may have to take more tests, take more steps to make the transfer, or simply apply as a new driver, having nothing to do with the driver’s license from the state you used to live in.

Regardless of if you need to retake the knowledge or road tests to obtain a new license after moving, protecting your vehicle is essential. Especially if you’ll need to drive in unfamiliar places after moving, it’s important to protect your car and belongings. Call an Infinity agent at 1-800-INFINITY or get an online quote today.