Top 5 Cities to Start Your Business

Entrepreneurship in the United States is a symbol of economic and social progress. For some, the American dream includes opening a business of their own. Starting a business for the first time is a challenge that depends on many factors. And according to one study, 9% of new businesses experience failure due to being located in an area where they don’t have access to the talent or market necessary to succeed. That’s why entrepreneurs shouldn't only be asking themselves how to build a business; they should also audit their city to examine if it provides the resources necessary for long-term success.

Because some cities offer more entrepreneurial opportunities than others, we have compiled a list of some of the best cities in the United States to open a business. 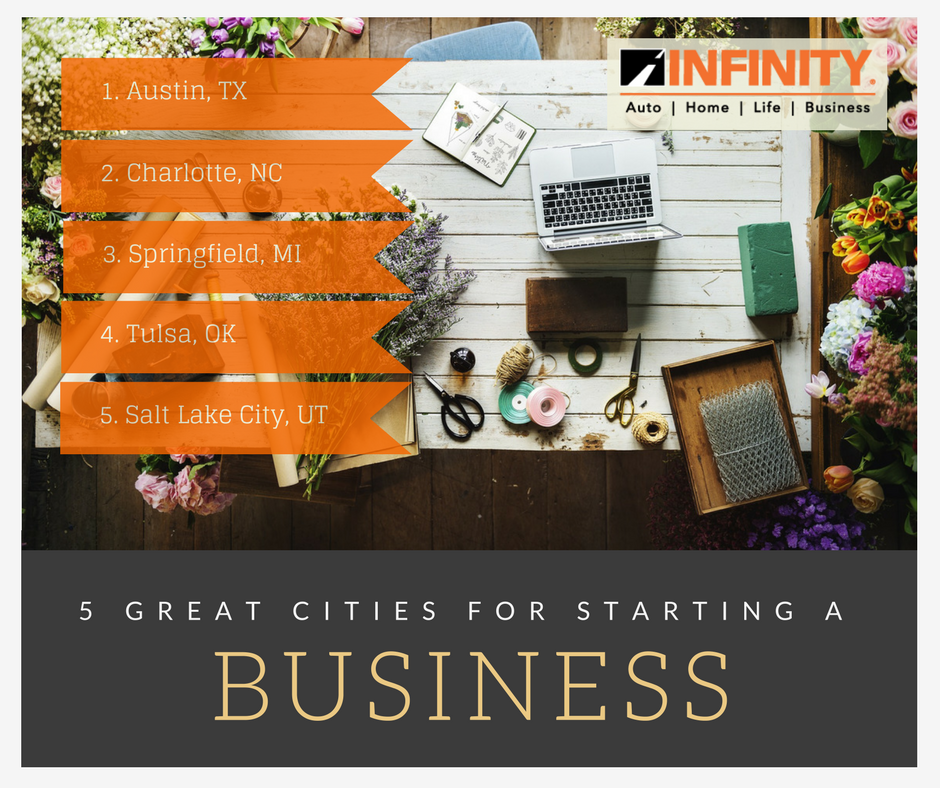 The first on our list is the city known for being the "live music capital of the world." The city of Austin, Texas has more live music venues per person than any other city in the United States. But that’s not the only reason we recommend this city for entrepreneurship.

In addition to having an exciting music scene, Austin has a more accessible cost of living compared to other popular major cities. It also offers the luxury of not charging any corporate tax or a personal income tax.

Rated by CNBC as the number 1 city in the United States to start a business, Kevin Johns, the Director of Austin’s Department of Economic Development, explained the reason behind why the city is attractive to business owners in a Fortune magazine article. Johns revealed that "Austin is the best place in the nation to start a business ... because our ecosystem has it all: entrepreneurs, incubators, investors, business school participation and community development events."

In a study conducted by WalletHub, the city of Charlotte (located in North Carolina), landed a spot as the #3 city on its list of the top cities to start a business. Charlotte offers an increasingly favorable environment for entrepreneurs due to the fact that it has some of the highest average growth in the number of small businesses compared to other cities. It also turned out to be one of the cities with the best "business environments", which WalletHub measured with factors such as the average length of the work week, and the 5-year business survival rate.

Commonly known as "the Queen City", the city of Charlotte holds a lot of history. The reason the name Charlotte was chosen is that King George III of Great Britain still ruled the American colonies during the time period in which the city was first formed and had just married Queen Charlotte. In honor of his wife, and to maintain the king's approval, the residents decided to name the city, Charlotte.

Steve Johnson, the executive director of the Missouri Partnership, stated that the city is ideal for entrepreneurs because “The Springfield region includes the third largest city and metropolitan area in Missouri and is highly rated for its fiscal climate, factors of habitability and growth in jobs and population.”

In addition, according to WalletHub’s research, Springfield is the #1 city with the most accessible business costs in the country, which could prove to be an attractive feature for many entrepreneurs.

Don’t forget that Springfield is known as the birthplace of Route 66. This great road was a symbol of an innovative time in the United States due to the construction of this scenic highway that began in Chicago, Illinois and crossed the country until arriving at Los Angeles, California. Highway officials officially named it the "U.S. 66 " through telegram at a meeting in Springfield, Missouri, on April 30, 1926.

With an urban population of 936,717 people, the city of Tulsa, Oklahoma was known as the "oil capital of the world" for much of the 20th century. That’s why many are surprised to learn that Forbes magazine named Tulsa as the top spot for young entrepreneurs.

For someone like Brian Paschal, executive director of The Forge, it's no surprise that his city is nationally recognized because "there are many ways to participate and the cost of doing" business is very low and the quality of life is excellent. Therefore, when you combine a low cost of living with a high quality of life…having a central location is excellent in terms of doing business."

Last but not least, is the Great Salt Lake City. It was once known as the "crossroads of the west" because of the construction of the first transcontinental railroad and now is accredited in the world of sports, especially with its status for skiing. It was also the host of the 2002 Winter Olympics.

But that's not all. In the world of entrepreneurship, The Tax Foundation ranked Utah as one of the states with one of the best corporate tax climates in the country. With a very competitive cost of living for self-employed workers (5.1% below the US average), Salt Lake City is an ideal location to start a business.

The business world is unpredictable, especially when you're just starting out. That's why Infinity Insurance has a team of reliable people at your service who can help protect your business with Commercial General Liability Insurance. To learn more, call an Infinity agent at 1-800-INFINITY or get an online quote today.